The Fingerprints of Poverty

Words from a terrific woman

Need some bucking up or just some spirited advice?
Here are 9 Rules For Success, from the novelist Amelia Barr. (Now here was a lady who probably said "Bow ties are cool"--and meant it!)
Posted by Wendy Wagner; at 10:01 PM 1 comment:

So, yesterday the Internet blew up because of an article about what it "really" means to be a professional writer (that article isn't loading right now, or I'd link to it, but here's a pretty great response by Brian Keene.) Neil Gaiman voiced a response on Twitter. Chuck Wendig made a response on Twitter. People were talking about this article A LOT.

And I wish they hadn't.

Why? Because they are blowing my cover!

If you look at that blog post by Brian Keene, he says where anybody can read (and I mean anybody, not just those yahoos at the NSA!) that he cleans his house EVERY SUNDAY. That's right. He claims that as a professional writer, he has time to clean his house. There goes my argument that I'm "too busy writing to clean."

Haven't you had those days where you just couldn't motivate yourself to do dishes? Or one of the cats looked so cute sleeping on the couch you couldn't bear to break out the evil vacuum cleaner, even though you just petted a dust bunny so big you mistook for the other cat? Or maybe you knew the BBC was about to make a big announcement about a certain blue box-driving character, so you couldn't tear yourself away from someone live-blogging the big event? Seriously! How could I mop the house when I had to find out who would play the 12th Doctor?

I'm going to have to break down and admit that I'm sometimes just a slob. Or else do what I did today: plotted a short story while I did dishes. If I remember right, that's how a certain writer used to do it.

And if Dame Agatha Christie wasn't a professional writer, who is?
Posted by Wendy Wagner; at 2:53 PM 1 comment:

Here's a cool guest post from my good friends Garrett Calcaterra and Ahimsa Kerp, who are co-creating a project that I think the world is more than ready for: METTLEFETCHERS, an interactive e-book, set in an amazing (and sexy) universe that I know I can't wait to play in. I'll let the guys describe it for you. 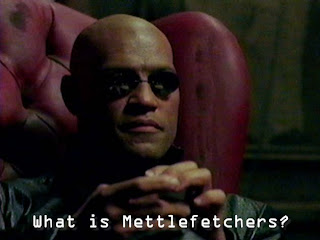 Ahimsa: I think we mean Choose-Your-Own-Adventure, but with that title already being taken, we have to go with “interactive ebook.” I think what we’re trying to create is an intersection between two great spec-fic loves—novels and games. I mean, sure I love Game of Thrones, but what if I could have been Ned Stark, and chosen to fight with Renly? Or captured Cersei? Or listened to Varys? I think we’re both really excited about the idea of a novel with reader input, and it seems that technologically the time is right. That said, we’re really not holding anything back! You want to talk about the setting, G?

Garrett: Does the pope wear a funny hat? Errr, I mean, yes! World building is one my favorite parts of writing, and world building is even better when working with a friend. I can say without any false modesty that the two of us are pulling out all the stops with our setting on Mettlefetchers, and it promises to be awesome. Our story is set in an alternate 1857—the height of the Victorian era—and will include everything from anachronistic steampunk technology to vampires, shape-shifters, elves, mythical beasts, aliens and zombies. The main premise of the book is that the rampant imperialism and pillaging of natural resources on the part of world powers has awoken a prehistoric menace—a slew of Great Old Ones and their minions. The result is global, mass Bacchanalian hysteria (which adds an erotica component to our story). This means the entirety of 19th Century Earth is our oyster, and readers will have a vast, sandbox world to explore. The usual European steampunk locales will be in there, but we’re making a big effort to provide access to the underrepresented parts of the world too: Asia, Africa, Central and South America, you name it. The steampunk aesthetic is very much in play there, which leads us to our protagonists. What sort of heroes will the reader have to choose from, Ahi?

Ahimsa: It’s important to us to have diversity in character as well as setting. Because we are starting off our story in Persia, we are thinking of using a eunuch or hijra as a point-of-view character. (I met a hijra while hiking in the Himalayas and she was one of the loveliest people I met on my travels). Overall, we have 6 POV characters, and in them we want to represent as broad a range as possible. One of the Mettlefetchers, for instance, is transgender (the term is 20th century, but the condition much older). This will tie into larger themes of identity, so it can be examined on a global, societal, and individual level. The characters will be very much linked thematically with the world they occupy, and it’s going to be exciting to “shapely up” our minds and make some connections. Whatever their orientation, however, our characters won’t be defined by their sexuality. You know what they say—what happens in Bacchanalian hysterias stays in Bacchanalian hysterias. And while we are on the subject of sex, Garrett, just how much erotica are we planning on including in this book? There won’t be too many turgid manhoods or quivering sexes will there?

Ahimsa: Well, Kickstarter is a pretty good litmus test of an idea. Like everyone who has created a project, we think it’s a pretty snazzy idea. But it’s not really up to us. So it’s fun to use crowdsourcing and see if we have a concept that is exciting enough for the community to fund.  Unlike, say, musicians or to a lesser extent artists, it’s hard for writers to work in a collaborative manner. So we wanted to create rewards for backers that involved their inputs. Depending on how much they pledge, backers can create characters, insert themselves into the narrative, or just make sure we include their favorite fetish into a significant scene. We want to make sure it’s deep enough for those who want to wade into our world.

While we could blather on forever, I think we’ve covered the essentials. Any last thoughts, Garrett?

Garrett: Yes, how can people help? The obvious answer is to pledge a couple of bucks to help make Mettlefetchers come to be. For as little as $5 you get an advanced copy of the book when it’s done (and we’re aiming to have the book ready in as few as three months if the project is funded, so you won’t have to wait long). Pledge more and you get some of the cool interactive rewards Ahimsa mentioned. To pledge or just learn more about the book, check out our Kickstarter page: http://www.kickstarter.com/projects/1474763974/mettlefetchers


If you’d like to help beyond that, we’d be forever grateful if you could help spread the word about the project. Kickstarter campaigns only succeed if they get out into the public awareness. Word of mouth is great, and if you want to have a bit more fun with it, you can take part in our inverse-meme campaign. Simply take one of our pictures with the phrase “What is Mettlefetchers?” on it and repost it wherever you hangout online. Better yet, create your own inverse-meme with “What is Mettlefetchers?” on it, post it, and let people’s curiosity do the rest.

If anyone has any questions or suggestions, hit us up in the comments below. We’d love to hear your thoughts.

Posted by Wendy Wagner; at 6:30 AM No comments:

It's summer time, which means scaling way, way back on my expectations for getting work done. The heat makes me a little dumb, and having my kid around all the time means a lot of distractions. I don't love falling behind on projects, but I don't mind having a little extra fun.

My daughter loves to bake, so a recent project (just before the heat wave hit!) was baking some yummy brownies with peanut butter topping. We used this awesome brownie recipe from Baker Bettie (we used the non-vegan version and subbed applesauce for half of the oil, with no apparent bad effects), although I will probably add a little salt the next time I make them.

So. Follow the brownie recipe, but before baking, sprinkle top of the batter with a handful or two of chocolate chips. Then dribble on:

Bake according to brownie directions: 20 minutes at 350 degrees. Then turn on the broiler for about a minute, which will bring out the caramelly goodness of the grown sugar.

The hardest part is waiting for the brownies to get cool enough to cut into very small pieces! (Pro tip: I used that time to henna my hair. It's much easier to resist brownies when your head is covered in a weird green powder that smells like the illicit love child of mate and kava.)

Today I got an email from SFWA alerting me to a legal fund they'd established to assist authors dealing with legal fees incurred from a particular copyright issue. And while I have no need for this particular legal fund, I was still happy to hear about it. It was a great reminder of why I joined SFWA.

I know the Internet has been abuzz with SFWA's difficulties lately. Ever since the "Chain Mail Bikini"cover, things have been pretty ugly in SFWAland. Their outreach tool, The Bulletin, has been stepping on toes quite a bit, and a lot of people are upset with the entire organization.

SFWA can feel like a tiny club of entitled writers, and it's not necessarily the perfect community for everyone in the speculative fiction writing field. But if you're not looking for community, if you're just looking for the kind of cover-your-butt-protection provided by a legal fund and an emergency medical fund and a team of people who actually understand big problems like literary agencies with new owners and no understanding of publishing; or publishing companies struggling to pay their authors; or the Google Book issue--well, SFWA provides that in spades.

I'm not happy with everything about SFWA, but I do know that when the time comes to renew my membership, I'll be paying my dues. It's a bit like paying for insurance: I might not love everything about my insurance company's business practices, but I sure like the peace of mind it provides.

So last night my husband and I finally watched Dr. Horrible's Singalong Blog. Which got me thinking about mad scientists.

[Side note: I have this giant poster of a book cover hanging over my tv: 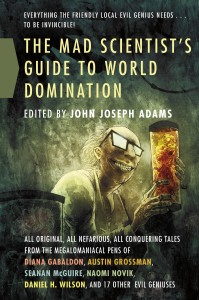 If you didn't know, I wrote the story introductions to this book, and the cover is AWESOME. But having a giant poster of a mad scientist hanging over one's television makes you think about science a lot!]

Anyway, after watching Dr. Horrible, I found myself full of rage. Why are superheroes always using these innate powers and abilities to save the day, but scientists are always using their gifts for evil? Why are scientists always portrayed as bad guys? After all, in real life every single good thing in the world comes from science!

Batman uses technology to save the day, too, but at least in the Christopher Nolan series, it's suggested that he cannibalizes a lot of ideas from his family's company. He's a clever guy, and I definitely approve of his work, but Tony Stark seems to have a much more scientific and inventor-ish approach to his superheroics.

Needless to say, Iron Man is officially my new favorite superhero.
Posted by Wendy Wagner; at 10:33 AM 2 comments:

Need to get in touch?